Stringing and the 12 hole tie-block

Traditionally, tie-blocks have one hole for each string. The single hole method results in a loop around the string between the tie-block and the saddle, which does a couple of things that are annoying. The first is to lessen the breakover angle. The second is that the wrap around the string actually can sever the string due to friction and tension. The 12 hole tie-block is a nice variation in that it avoids those issues.

The next few pictures show how to tie using the 12 hole block. Later, I’ll do another post on what happens at the other end.
It’s easy to lose concentration while installing strings, so I use a cardboard piece to protect the top. 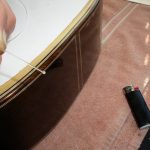 The high E string. This is partially superstitious, the burning of the end. However, I almost always have done it since I was a teenager. Playing with fire… After determining which end of the string goes to the bridge… 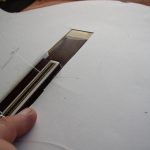 For the treble strings that have a burnt end, they follow this process: First insert the tuner end of the string into the left hole (which is slightly higher on the tieblock.) 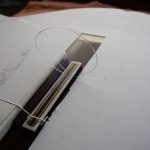 2. The string goes through the tie-block and loops around to the next hole to the right, and through it to the front of the tie-block. 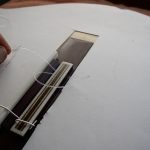 3. Concentrating on the balled end, I put a small bend about a quarter inch from the end. Note that the end now goes through the loop. 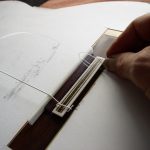 4. Now hold the end against the tie-block. The next step is to pull the string and the end will get caught in the bight. 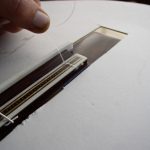 Here the left hand pulls the string. You can clearly see the bass string, which has already been secured. 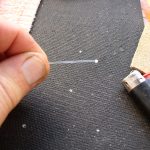 Be Careful burning the string ends 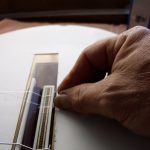 Hold the string while the loop tightens 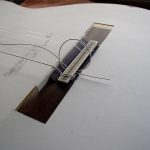 Here is the loop 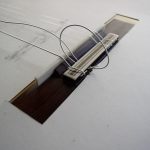 Another angle on the loop

All the strings are secured.

Luthier in the northwest of the Northwest. Classical guitars, custom instruments, repairs and restorations.
View all posts by steve →
This entry was posted in Uncategorized and tagged bridge, holes, stringing, tie-block. Bookmark the permalink.